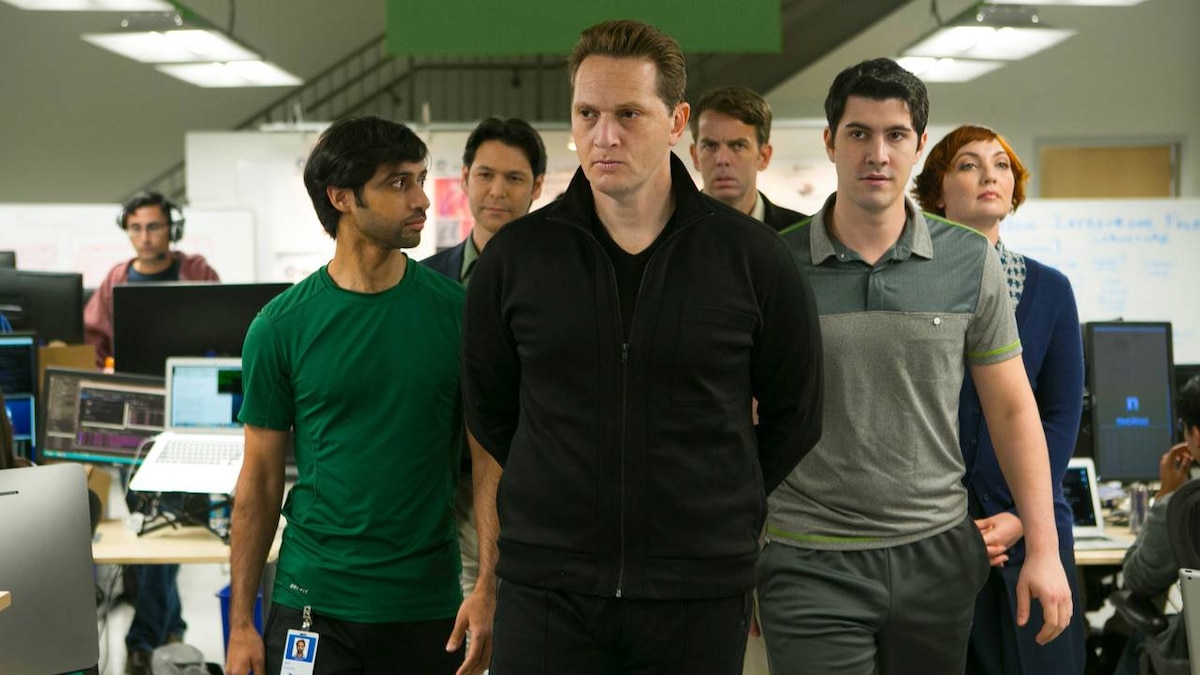 It's almost time for the TechCrunch Disrupt startup competition. Gavin Belson and the Hooli brogrammers are celebrating: Nucleus is done and "optimal." The mood at the Hacker Hostel isn't quite as celebratory, as Pied Piper isn't quite done.

Monica meets Richard, Gilfoyle, Dinesh, and Erlich as they enter TechCrunch Disrupt to distribute both their lanyards and a bunch of advice. Jared is there and seems miffed that she's seemingly taken over as their business advisor. While looking through the event program, Erlich reveals that he's had sex with the wife of one of the judges, Dan Melcher. He tells Richard that he may have to present instead if this fact becomes a problem.

Richard heads off with Dinesh to put finishing touches on Pied Piper, while Gilfoyle and Jared set up the Pied Piper booth in the exhibition hall. A girl from a neighboring booth for something called Cupcakely asks Gilfoyle for help with a Java bug, and he obliges.

On the way to the hotel, Richard runs into Big Head, who's loving his "rest and vest" life and his current plan to get a boat. Big Head says that the night before he ran into a woman, Sherry, who went to school with Richard. The girl apparently was telling people that after a few dates in college Richard became obsessed with her. Richard seems consumed by that fact, but Big Head has to quickly run off when the Hooli brogrammers appear.

Erlich sees Dan Melcher, and the judge pantomimes shooting a gun at him, which concerns Erlich. Richard is obsessing over what Big Head told him about Sherry. Dinesh heads back to the booth, and sends Gilfoyle up to work with Richard. Dinesh gets his chance to help the Cupcakely girl with Java.

Erlich goes on a quest to find Dan Melcher's wife and discern if she's told him about their fling, but instead he finds out that Dan Melcher has a new wife. "Problem solved," Erlich tells the guys. At the presentation run-through, Erlich takes over, and Dinesh tells Richard and Gilfoyle that he met the perfect woman in the Cupcakely gal, Charlotte. Dinesh is in love with her code, but Gilfoyle bursts his bubble when he reveals that he wrote the code. "Just face it, Dinesh: You're gay for my code," Gilfoyle says. Later, Dinesh tries to have sex with Charlotte but, with what Gilfoyle said on his mind, he can't go through with it.

At the bar later that evening, Richard makes a scene when he runs into Sherry, screaming that he's not obsessed with her. After she runs off, Sherry overhears Jared telling Monica how dedicated he is to his "partner" Richard. Jared is using the word "partner" in the business sense, but Sherry hears something else. She approaches Richard and apologize for saying that he was obsessed with her -- she thinks he's gay, but Richard doesn't seem to fully pick up on that. Gilfoyle, Dinesh, and Richard head off to finish up Pied Piper, but Erlich stays at the bar and runs into Dan Melcher's new wife. The two start chatting.

The presentations at TechCrunch Disrupt begin, and various nerds parade on the stage awkwardly trying to sell their products. Gilfoyle, Dinesh, and Big Head are backstage about to start their presentation. Erlich shows up at the last second and tells the guys that he had sex with Dan Melcher's new wife.

The Pied Piper presentation starts with a dramatic introduction by Erlich, but just as he's launching into the presentation, Dan Melcher comes out and attacks Erlich.